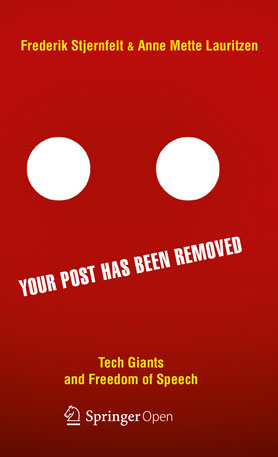 Your Post has been Removed - Tech Giants and Freedom of Speech

In this book the authors, Frederik Stjernfelt and Anne Mette Lauritzen, argue established democratic norms for freedom of expression should be implemented on the internet. The book is available through open access.

This open access monograph argues established democratic norms for freedom of expression should be implemented on the internet. Moderating policies of tech companies as Facebook, Twitter and Google have resulted in posts being removed on an industrial scale. While this moderation is often encouraged by governments - on the pretext that terrorism, bullying, pornography, “hate speech” and “fake news” will slowly disappear from the internet - it enables tech companies to censure our society. It is the social media companies who define what is blacklisted in their community standards. And given the dominance of social media in our information society, we run the risk of outsourcing the definition of our principles for discussion in the public domain to private companies. Instead of leaving it to social media companies only to take action, the authors argue democratic institutions should take an active role in moderating criminal content on the internet. To make this possible, tech companies should be analyzed whether they are approaching a monopoly. Antitrust legislation should be applied to bring those monopolies within democratic governmental oversight.

Despite being in different stages in their lives, Anne Mette is in the startup phase of her research career, while Frederik is one of the most prolific philosophers in Denmark, the authors found each other in their concern about Free Speech on the internet.

Frederik Stjernfelt is affiliated with the Humanomics Research Centre and the knowledge group Science, policy and Information Studies at Aalborg University